From Patrick McIlheran, a link to a document called Iraq Index, which is a sober and extensive accounting of how the reconstruction in that war-torn country is going.

The picture is complex, with some good news and some bad news. For example, the number of insurgent attacks has trended upward, but the number of fatalities among U.S. troops has been trending downward.

On an Index of Political Freedom, Iraq ranks at number four among Middle Eastern nations, behind only Israel, Lebanon, and Morocco. It is ahead of sixteen other nations.

But perhaps the most siginficant result follows from a question that asks:

THINKING ABOUT ANY HARDSHIPS YOU MIGHT HAVE SUFFERED SINCE THE US-BRITAIN INVASION, DO YOU PERSONALLY THINK THAT OUSTING SADDAM HUSSEIN WAS WORTH IT OR NOT? (chart shows those who responded “worth it”).

The chart is reproduced at the below. 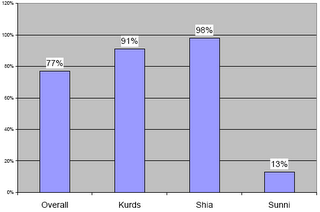 It shows that vast majorities of both Kurds and Shiites believe that the liberation was worth it. 91% of the former group and 98% of the latter group say it was “worth it.”

Only the Sunnis, the chief beneficiaries of Saddam’s regime, feel differently.

It’s a stinging rebuke to the Democratic left.