What Cars Do Harvard Faculty Drive?

Via Cold Spring Shops, a survey of what autos Harvard faculty drive.

Many of [the faculty] express their concern about the environment in a more conspicuous way: they drive Toyota Priuses, the hybrid-engine vehicles that get over 40 miles to the gallon. Computer scientist Margo I. Seltzer ’83, a recent Prius convert, says she started feeling guilty about her ’96 Toyota Corolla when she saw Al Gore ’69’s “An Inconvenient Truth” over the summer.

Other green-conscious professors contacted by The Crimson bragged about their fancy bicycles. Economist Emmanuel Farhi says his bike is “very powerful,” and physicist Gerald Gabrielse notes that his is made of titanium.

What do Harvard faculty not drive?

Overall, Toyota was the most popular make, followed by Subaru, Honda, Saab, and Volvo. 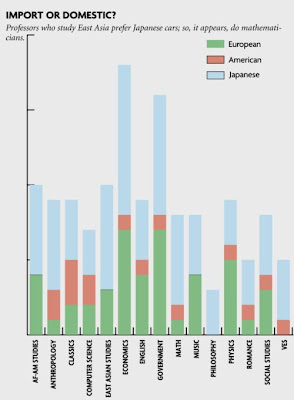 I am reminded of this conversation on EconTalk where Mike Munger tells of a meeting of Duke department chairs. Everyone has a Prius or other hybrid. Next to last comes up the chair of chemistry, who argues that hybrid cars may use more energy (though less fuel) than gas vehicles. (Here’s one report explaining why that might be so.) The chemist is then asked what he drives. “Oh, I drive a Prius, but that’s just because you have to if you’re gonna be a faculty member.” At Harvard, one environmental studies professor drives a ‘96 Suburban, arguing that he reduced his carbon footprint at home. But eight of 18 economists who answered the survey said they owned luxury cars. Most popular across the campus? The Subaru Forester.