A video about Prof. Bradley Schaefer, an astronomy professor at Louisiana State University who made students seat themselves according to their views on policy toward “global warming.”

Here is the seating chart.

He then began to attack and berate students who failed to endorse liberal policies on the issue.

“You will not want your children, if they live, why you’re sitting on that corner, that you’re part of the the trouble, right?” he says. Then he tells another student, “Too little, too late. Blood will be on your hands.”

Schaefer’s department chair conceded “I will confess that while this film was heavily edited, it looks pretty embarrassing. I think it’s probably fair to say he was not sufficiently sensitive.”

We’ve written Prof. Schaefer asking for comment, and will report his reply.

A commenter on the web page we linked to claimed that Schaefer is the victim of selective editing. Specifically:

The truth of the matter is that this was an intellectual exercise. The professor did seperate [sic] the class by their self reported political beliefs, but then he attacked the views of both sides. The folks who run this site left that part out though because it doesn’t fit the story they are trying to spin.

“You want to get rid of the internal combustion engine,” he said mockingly to self-identified liberals. “How many people are going to die with that? How are you going to feed the people in the cities?”

The problem with this argument is that all the “middle” positions he did not attack were in fact liberal positions.

See the seating chart below (and you can click on the graphic and see it full size). 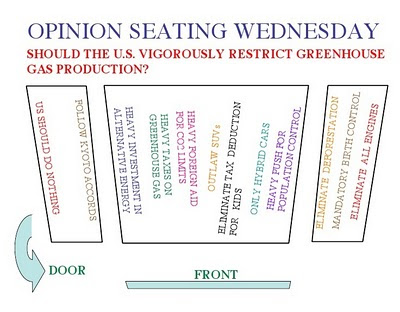 So the exercise was a bit like putting Communists on one side of the room, and Republicans on the other, and “even-handedly” attacking both, leaving the liberals unmolested.

CampusReform.org has posted the full, unedited video. If anything, it’s worse that the edited version they originally posted.

Another version of the video shows Schaefer suggesting that India and Pakistan, both of which have nuclear weapons, might use them to attack the U.S. because of our failure to adopt the policies he favors.

"So the exercise was a bit like putting Communists on one side of the room, and Republicans on the other, and “even-handedly” attacking both, leaving the liberals unmolested."

I am a little surprised that this professor did not use a front to back seating arrangement so that the "unbelievers" could be at the "back of the bus".