In the best academic tradition, the Marquette College Republicans tried to set up a debate on the abortion issue, asking one of the most famous abortion supporters in the nation, Marquette’s own Dan Maguire, and gadfly columnist and conservative academic Mike Adams to represent the opposing sides.

But when Maguire found out that he was going to debate Adams, he backed out.

Maguire claimed he refused to debate because Adams is not a theologian, although Maguire has debated non-theologians before.

So Adams will be speaking about abortion this Thursday night (March 1).

The program is titled “A Matter of Life and Death,” and will be held in the AMU Ballrooms at 7:00 p.m.

Adams is a very gifted polemicist, and a gutsy fellow who seems to very much enjoy being a conservative immersed in the liberal slough that is academia. We expect it to be a very interesting talk. 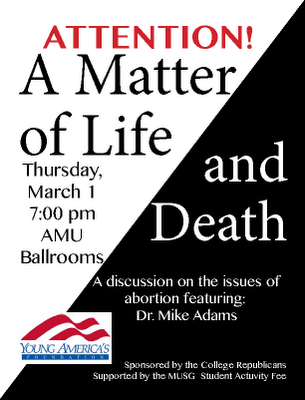