Single Parenthood is Bad for Children

It seems Senator Glenn Grothman has stirred up all the politically correct types by introducing a bill that would require a state agency that is concerned with child abuse and neglect to pay attention to the most important cause of that abuse and neglect: family structure.

This reflects on sexual behavior (having children out of wedlock) and liberals are committed to the notion that no sort of sexual behavior should be stigmatized, even if it has nasty social consequences.

But the data are overwhelming. Below is a chart from a report by the Department of Health and Human Services on child abuse and neglect.

(You can click on the image to see a larger version.) 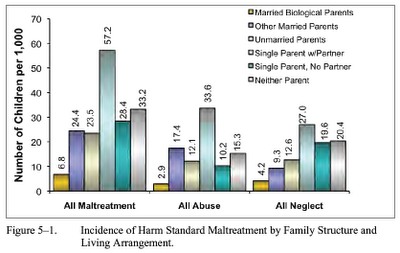 There simply isn’t much room for debate on this. Sure some (actually many) single moms do a good job with their children. And some marriages are destined to break up. Further, maybe it’s the father’s fault.

But the social norms and mores that have produced a massive number of children being raised by a single parent have harmed children hugely.

That liberals want to impose silence on this reality suggests that they don’t really care that much about children.

"...liberals ... don’t really care that much about children."

Well, you finally figured it out. The gig, at last, is up. Your investigative skills are impeccable. My hat is off to you professor. Your institution of higher learning must be so proud to have you represent it.

To my evil liberal cohorts, please meet me behind the magic hashtags of secrecy. ### He STILL hasn't discovered that we really DO like children ... MEDIUM RARE!!! Bwa. Bwa ha ha. BWA HA HA HA!!!! ###

I was from a single parent family. Fortunately, my mom wasn't given to hanging out in bars and bringing home any guy that caught her fancy. I had a few friends whose moms were like that. Different guy every month or two. Nothing stable except for extended family like grandparents. I had an uncle who took time from his two kids for me not much, but what he could.

That's not to say mom was perfect. had she not been single, had her and dad been able to work things out, then she wouldn't have gotten me into the Big Brother program. Then I wouldn't have been molested by said BB. Life is strange that way. Yet, would I still be who I am today without the events of my youth? Who can say. It's not something one should dwell on. That said, overall, single parenthood IS bad for kids. Sometimes, though, it's likely better if one parent abuses drugs or alcohol. Blanket statements are hard here.