Liberals love to believe that conservatives are anti-science, and that they (the liberals) embody objective scientific enlightenment.

This tendency is, of course, quite selectively observed. Liberals entirely ignore the economic science that says that minimum wage laws are harmful. And liberals are more likely to believe that astrology is somehow scientific. Indeed, among voters in the 2004 presidential election, more Kerry voters than Bush voters said astrology was “very scientific” or “sort of” scientific.

But where supposed global warming is concerned, liberals wrap themselves in the mantle of “science” and proclaim that skeptics are flat-earthers.

But now comes a study, from a mainstream academic journal, financed by the National Science Foundation, showing that the more somebody knows about science and math, the more likely they are to be skeptical of the supposed risks of global warming.

When asked “How much risk to you believe climate change poses to human health, safety or prosperity?” those with a higher level of science literacy/numeracy saw less risk. The difference is not large, but it runs in entirely the “wrong” direction. It is also statistically significant: greater than could be accounted for by mere chance. 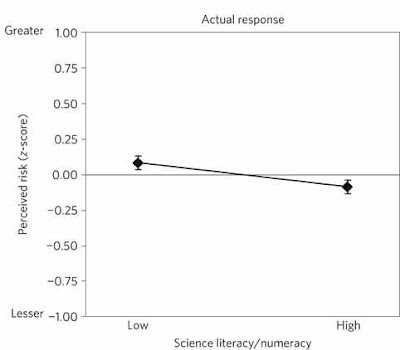 The most straightforward interpretation of the results is that the more people know about science, the more sophisticated and skeptical they tend to be. They know that ideology, careerism and group think affects scientists as much as anybody else, and they know about Piltdown Man, Lysenko and cold fusion. Scientists will claim that science is “self correcting,” and therefore we should believe whatever science says. But sophisticated people know that science can take a long time to correct, especially when powerful interests and/or ideological biases are in play (as with Piltdown Man and Lysenko).

The authors of the study, who seem to be true-blue (or perhaps true-green would be better) believers, don’t draw this obvious conclusion, but rather invoke social conformity. They say:

For the ordinary individual, the most consequential effect of his beliefs about climate change is likely to be on his relations with his peers. A hierarchical individualist who expresses anxiety about climate change might well be shunned by his co-workers at an oil refinery in Oklahoma City. A similar fate will probably befall the egalitarian communitarian English professor who reveals to colleagues in Boston that she thinks the scientific consensus on climate change is a hoax.

The problem with this argument, of course, is that it works equally well for climate scientists, who are as sensitive to the opinions of their subculture as anybody else. Indeed, more so, since to prosper (and even to get tenure) they need to be within the acceptable range of opinion.

This tendency to demean — and indeed to threaten and intimidate — those who are skeptical about global warming seems to suggest one of two things. Either those who support that view are at some level insecure about their position, and not willing to see an open and free-wheeling debate, or they are part of such a narrow little subculture that they really can’t understand how anybody can disagree with them.

"ideology, careerism and group think affects scientists as much as anybody else"

Well, thank goodness you're above all that :)

My irony-o-meter just blew a gasket.

And once again, I grunt in frustration. Starting with the comma after "The difference is not large" your analysis is off. That z-score is, for all intents and purposes, flat. It's only purpose is to reject the null hypothesis, which cannot be done here. And being standardized, neither can you say an X increase in literacy leads to a Y increase (or decrease) in Y. You might consider your interpration "straightforward," but neither I nor the authors would agree with you. And your suggestion that Cultural Cognition Thesis (which the data DOES support) "works equally well for climate scientists" is entirely off the top of your head. You believe it. Fine. But without a similar examination of the opinions and attitudes of scientists themselves, you are best to keep that to yourself.

Global warming is a religion

It's only purpose is to reject the null hypothesis, which cannot be done here.

Actually, it can. The error bars on the lines are at the 95% confidence level.

My irony-o-meter just blew a gasket.

Are you denying that what I said is true?

I have said for years that so-called Global warming would be proven Junk Science, all the data I have looked over leads me to be much more than skeptical. Big money is to be made by promoting UN regulations and selling overpriced so-called solutions, or rather forcing them on industry. All the data I see points to a cooling trend over the last 13.7 years not warming. Cycles have always come and gone and will continue long after this debate is over. Presently most of the hot air is coming from wind generators (funny ain't it?) and the hot air from windbags like Al Gore who would be hard pressed to tell a Narrow-mouthed Toad from the supposedly endangered Polar Bear.

A flat line can be significant, but that does not make it not flat.

After man-made global warming is totally disproved, UN types will have to invent a new rationale for massive industry/wealth transfer from the developed 1st world to the 3rd & 4th world. Any predictions?

Larry, for months I have been challenging the professor to choose a data set, run a regression line through it, and show cooling. No luck so far. Perhaps you would be willing to pick up the glove. My only request is that IF you choose to start with 1998 (now WHY would I think that would be the case?) you state your reasons for doing so.

A flat line can be significant, but that does not make it not flat.

A really flat line cannot be significant. The line is not flat. As I said, the relationship is not strong, but it runs opposite what you would want it to.

run a regression line through it, and show cooling

No, you need a significant regression line that shows warming. Every year that passes that does not exceed the previous high renders it less likely that global warming is continuing.

There is no doubt that global temps went up a degree (more or less) in the 20th century. But the anthropogenic global warming theory says they should continue to go up.

Liberals also think they are the generous charitable ones. Study after study shows that they are only generous with other peoples' money. Conservatives (including low income comservatives) give more to the less fortunate across the board