Marquette Warrior: Online Liberals More Likely to Block People Who Disagree With Them

Online Liberals More Likely to Block People Who Disagree With Them

But now we have a Pew Poll with fairly extensive information on people’s behavior on social networking sites (Facebook, etc.), including information on who has blocked or otherwise excluded people because they disagreed with their political opinions. 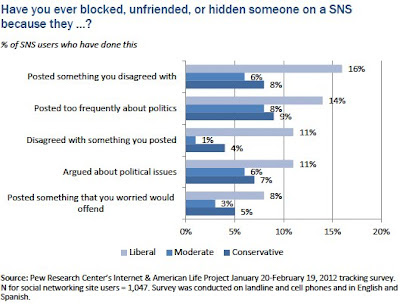 So who is more likely to block somebody somebody on the basis of their political opinions? Liberals, of course.

The absolute percentage of liberals who have blocked somebody (16%) does not look large. But then a lot of Facebook users sign on very infrequently, and a lot of others have Facebook friends who pretty much always agree with them, or friends who just don’t post about politics (perhaps because they are not very political). So 16% is probably a very large proportion of the the users who actually find political content that they dislike on Facebook.

The corresponding number for conservatives is 8%.

It’s possible, of course, that conservatives do a better job of “friending” only people with whom they agree. But at the minimum, this data fails to give any support to the notion that liberals are more open-minded toward diverse opinions and points of view.

So how does this fit in with your failure to publish my last several comments?

your failure to publish my last several comments

The only one of yours I have recently rejected is one that called me "delusional."

Maybe I should have approved that, merely to make my point about liberals.

Yeah, that's the one where you said that it's "...undeniable that Democrats don’t mind illegal immigration, nor welfare dependency, nor bearing children out of wedlock."

Yep. I'd call that delusional. We certainly acknowledge that each is a problem, but perhaps for different reasons and support different solutions.

But you brought it up this time, so what excuse will you use this time to stifle debate.