From Zero Hedge, the fact that food stamp dependency has reached an all-time high. See the two charts below (click on the charts to see a larger image). 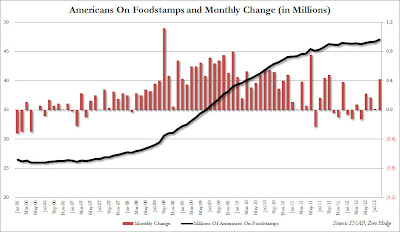 Of course, use of food stamps should increase in economic hard times. But the problem is that, while the number of jobs in the economy has rebounded a bit (and unemployment decreased a bit) food stamp dependency continues to increase.The NFP number below is “non-farm payroll” jobs. 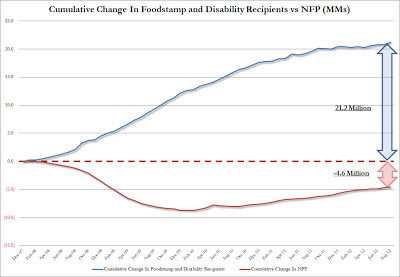 So why has the number of people on food stamps increased when the need for food stamps decreased.

There are two possible answers, and we don’t know of data that would answer which is the most important. First, explicit government policies designed to enroll more people in government welfare programs may be having an effect.