Marquette Warrior: No Global Warming for the Last 16 Years

No Global Warming for the Last 16 Years

Yes, this was linked on Drudge, but we can’t resist blogging about it.

It seems there has been no global warming for the last 16 years (actually, just a bit less than 16). 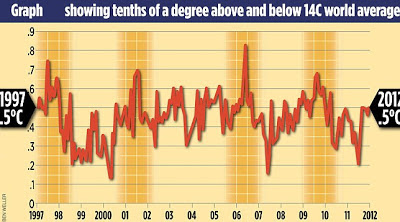 The global warming proponents at Britain’s Met Office have responded to this, claiming that you can show warming if you choose the proper end points of the series. Lop off the first couple of years, and the trend is upward. And indeed, if you go backward to 1980, the trend is clearly upward.

But if global warming is real, we should not have had a decade and a half of temperatures with no warming trend.

Proponents usually fall back to claiming that there is a “consensus” among climate scientists about global warming. But whole groups of scientists have been wrong before, and they are particular likely to be wrong when large government grants are at stake. They are particularly likely to be wrong when their political ideology inclines to a particular view. And they are just as prone to group think as any other segment of society.

The graph tells the story. Is it possible that warming will resume? Of course. And it’s quite possible the earth will become colder, as it has after each previous warm spell.

The money quote in the Daily Mail article comes from British Energy Minister, John Hayes, who said that, for the UK:

. . . the high-flown theories of bourgeois Left-wing academics will not override the interests of ordinary people who need fuel for heat, light and transport – energy policies, you might say, for the many, not the few.

That does go to the dirty little secret of the warmists: they are elitists who resent the affluence of the masses.

Again, you prove your utter incompetence in commenting on matters statistical.

The Sun rotates about the Earth. Right?

The response of a complicated ecosystem to forced changes is nonlinear. Of course, you can look at any trend you wish but the trend over the past 100 years is quite clear. Your analysis is similar to an obese person finding in the past year that they haven't gained weight, and pronouncing themselves fit.

>> Your analysis is similar to an obese person finding in the past year that they haven't gained weight, and pronouncing themselves fit. <<

But the argument is not that the earth is hotter than 100 years ago, it's that it is getting still hotter.

BTW, you are aware that the earth, at several periods in its history, has been hotter than today, right?

Really embarrassing that the data doesn't show what you want it to, isn't it?

1. The report of the World Bank on the severity of global warming. Hardly a leftist/socialist organization.

2. The concentration of greenhouse gases in the atmosphere hit a record high in 2011, the United Nations' World Meteorological Organization (WMO) reported Tuesday (Nov. 20).

The fact that the earth in the past has been hotter than it is today bears no impact on man-made climate changes taking place since the industrial revolution. If the concentration of greenhouse gases continues to increase, the world will get warmer.
There is no doubt about that.

This is very similar to the case of the ozone layer, which your compatriot Rush Limbaugh and other right-wingers denounced. In fact, Rush claimed that chlorine couldn't be a problem because of the HCl ejected in volcanic plumes. He didn't know his basic chemistry and atmospheric physics, and you don't either, I hate to say.

Your post begs the question, and evades the issues.

So the World Bank believes in anthropogenic global warming? They have no expertise in climate science. They are just spouting conventional opinion.


"Record high concentration of greenhouse gases?" That begs the question, don't you understand?

The fact that the earth was warmer in the past shows that things that have nothing to do with industrialization have a very large effect on climate. The fact that in the 20th century the temperature went up less than a degree celsius is not in fact impressive given fluctuations in the past.

>> Your analysis is similar to an obese person finding in the past year that they haven't gained weight, and pronouncing themselves fit. <<

But the argument is not that the earth is hotter than 100 years ago, it's that it is getting still hotter.

Your response to Anonymous shows you completely miss his point, though perhaps the analogy can be sharpened. Over the course of 15 years, person A gains 150 pounds, but over that period of time A occasionally experiments with various fad diets that allow him to lose a few pounds, even though he never keeps it off. So this past month, A has tried a new diet which has allowed him to lose 6 pounds, which leads someone like you to declare: "See!! A's not gaining weight anymore!" Of course there is a sense in which you are correct, but in the important sense you are not. Given that in the past A has tried diets which have resulted in periods of weight loss, and granted that it would clearly have been a mistake to have inferred that A's weight gain had stopped, it would not be rational to assume in this case that it had. Of course, it is always possible that the weight gain has stopped. But based on past experience it does not seem like it would be rational to write a blog post in which you declare that this past month shows that A is no longer gaining weight. That is, it would not be rational to take this past month as evidence given the all the information available.

Now the difference, of course, is that instead of dieting, the variable that has led to the leveling of temperatures are commonly known weather patterns such as La Nina and El Nino which skews or introduces noise into the data, data which otherwise shows that global warming has not stopped. I suspect this is what jimspice meant in his comment about your understanding of matters statistical.

Your readers should at least have access to an alternative view:
http://news.discovery.com/earth/no-global-warming-hasnt-stopped-121017.html

Great post. But logic is completely lost on this blog. Apparently, the moderator believes in the logic of social inquiry, but not in the logic of scientific inquiry. I couldn't stop laughing at the line "the dirty secret of the warmists is that they are elitists who resent the affluence of the masses". At least when Rush Limbaugh spouts such complete nonsense he is doing it for entertainment purposes - you actually believe it!

So you claim there is no global warming. How does this claim affect your actions/habits, I wonder? Do you draw the conclusion that it is okay to continue to pollute the earth with harmful chemicals and plastic trash, with SUVs and Hummers?

To the liberals on this thread: go ahead and ignore the data, and assume on faith that the earth will again start to get warmer.

You folks don't even know how to consider that the global warming dogma is wrong. You just keep begging the question.

Nice. You respond to good counter-arguments with an ad hominem attack. Weak.

If you keep simply begging the question, I won't post your comments.

If you actually have an argument then please post it.

This is a link to an argument that I summarized in a comment that you never responded to. That would be a good place for you to start.

So, what is wrong of this critique of your way of reading the data.