The BCS college championship game was such a blowout that the only interesting storyline has to be something other than the game, and ESPN announcer Brent Musburger provided it.

(NEWSER) – If you haven’t heard the name Katherine Webb today, you missed a lesson in instant celebrity-making. Webb, also known as Miss Alabama, is the girlfriend of Crimson Tide quarterback AJ McCarron, whose team won the BCS title last night. But Webb’s celebrity turn began early in the game when ESPN cameras found her:

Brent Musburger: “Wow, I’m telling you quarterbacks: You get all the good-looking women,” the 73-year-old announcer said. “What a beautiful woman. Wow!” The cameras went back to her again and again as her Twitter following grew.

ESPN: “We always try to capture interesting storylines and the relationship between an Auburn grad who is Miss Alabama and the current Alabama quarterback certainly met that test. However, we apologize that the commentary in this instance went too far and Brent understands that.”

Webb: “It was kind of nice,” she tells AP. “I didn’t look at it as creepy at all. For a woman to be called beautiful, I don’t see how that’s an issue.”

Twitter: As of this evening, the 23-year-old Webb had more than 180,000 followers. She had a few hundred before the game.

So the politically correct prudes found Musburger’s comment “went too far,” but the woman who was the object of the comment — the only person in the world with any standing to be offended — didn’t mind being called beautiful.

So she’s not only drop-dead gorgeous, she’s a very sensible lady.

Feminists, eat your hearts out. 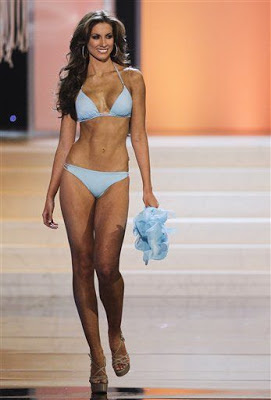 This is classic, John. She is definitely a sensible lady. I'm a college football fan and don't care for Musburger's announcing, but the people who found it necessary to apologize on his behalf for calling a beautiful lady "beautiful" are the losers here.

Wondered how we'd get along without Murdoch's SUN. Now I know