A few days ago, China Central Television showed footage of what they claimed was an air force training exercise conducted on January 23. From the looks of things, they were actually just playing clips from Top Gun.

The clips in question were reportedly aired during the News Broadcast program on China Central Television, the major state television broadcast company. They supposedly showed a J-10 fighter firing a missile at another aircraft during a practice exercise.

But an internet commenter quickly pointed out that the aircraft the J-10 was shown shooting down was an F-5, an American aircraft, and the very one Tom Cruise guns down in a scene from Top Gun. Comparing frames from the CCTV broadcast (left) and Top Gun (right), well, they’re lookin’ pretty much identical. 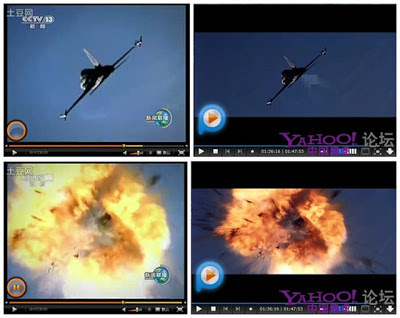 An authoritarian government might think it could get away with something like this if it has the power to censor every news outlet that might reveal the hoax. But this is becoming vastly more difficult, even in places like China. So ultimately, it’s more laughable than deplorable.