It seems the Heartland Institute, which is skeptical of man-made global warming, sent some of its books to the San Jose State University Meteorology Department.

Not being too keen on dissenting views, two of the faculty members (one of them the department chair) put a match to it. 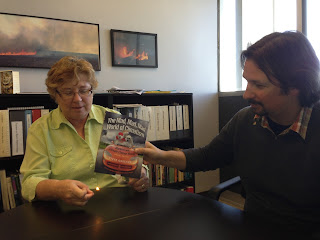 The current web page of the department has the image removed. But of course, the original version is archived.

Sometimes academics, regardless of their better judgment, let their inner authoritarian out.

Hat Tip: Watts Up With That? and Cold Springs Shops

We wrote one of the scientists in the photo, Craig Clements, and he responded as follows:

Thanks for your email. No, the book was never burned. We never intended to burn the book. The Department of Meteorology and Climate Science has removed the material in question from its website, and regrets what was clearly an ill-conceived attempt at satire. Please be assured the university does not condone book burning for any reason.

It’s nice that they considered this a form of “satire,” but the symbolism was absurdly bone-headed.

It’s also the case that the whole global warming movement has been shockingly intolerant of dissent. So we have to wonder whether the San Jose State University Meteorology Department would ever hire a professor who was skeptical of the theory, or whether they would ever invite a speaker who was critical. And we also wonder what would happen to the grade of a student who failed to embrace anthropogenic global warming.

",,,what would happen to the grade of a student who failed to embrace anthropogenic global warming."

Thank you for proving what I said about the authoritarianism of liberals.

By the way, I teach public policy. Do I have a right to fail any student who favors minimum wage laws?

Among economists, opposition to the minimum wage is as much the orthodoxy as man-made global warming is among climate scientists.

That you would consider those two situations analogous says much, and your inability to accurately interpret the global warming stats seriously calls into question the conclusions you have drawn in your own empirical research. The methods are the same. If you were a competent statistician, the correct answer on AGW would be clear to you.

That you would consider those two situations analogous says much,

You want to punish any student who dissents from the orthodoxy of the climate scientists, but apparently were you disagree with the science, dissent is fine.

You want orthodoxy imposed, with punishment meted out to dissenters, where you happen to agree with the orthodoxy.

No. Suggesting the earth has not warmed over the past 100 years due due to the re-introduction of previously sequestered carbon into the bio-sphere would be akin to saying there has been no dramatic shift in income inequality over the past 50 years.

Favoring minimum wage laws is a normative assessment, and would be analogous to favoring cap-and-trade laws. If one were to recognize AGW but same simply "meh, let it get hotter. I've got my stock portfolio to worry about" I could at least respect their stats chops. I would still consider them a horrible, selfish human being though. Just as I would someone who preferred 200+ to 1 CEO to worker compensation ratios, therefore minimum wage laws are "bad." And I would not flunk a student for holding those views.

But your eagerness to regurgitate, on this very blog, such Heritage Foundation talking points as "...there has been no global warming for the last 16 years..." leads me to believe you grasp of scientific methods is suspect, at best, or that you are purposefully misinterpreting the numbers to fit your political agenda.

Either way, your errors on the "pure" side of science invalidates your assessments on the "applied" side -- regarding both atmospheric and political science.

Dr. McAdams,
When you state that "opposition to the minimum wage" is "orthodoxy among economists" you are simply wrong. I know how you teach the minimum wage, and your understanding of the effects is as simplistic as one would learn in an introductory microeconomics course. Real economists, however, have a much more nuanced view because they understand how and why the demand for labor is not the same as the demand for, say, potatoes. There has been an enormous body of research over the past few decades that shows little if any negative effect on employment from minimum wage increases (Card, Krueger, and Katz are some of the big names here). These studies use new approaches, beyond the theoretical and oversimplified supply-demand price floor approach you teach. In fact, most economists do support the minimum wage, and many would support an increase. But don't just take my word for it. The University of Chicago's Booth School of all places conducted a survey of leading economists from across the ideological spectrum and asked how they felt about increasing the minimum wage. When asked whether the benefits of raising the minimum wage to $9/hour outweigh the potential costs, only 11% of economists polled said they "disagree" or "strongly disagree" (source: http://www.igmchicago.org/igm-economic-experts-panel/poll-results?SurveyID=SV_br0IEq5a9E77NMV). In my world, 11% does not constitute orthodoxy. Some advice: you're going to try to speak for the field of economics it is best to be informed about what it is economists actually believe.

The problem is that there is no sensible normative position that would justify minimum wage laws. We do have an earned income tax credit, that is a good way to help low income wage earners without distorting labor markets.

And I would not flunk a student for holding those views.

But you would flunk a student for rejecting anthropogenic global warming.

You need to be more tolerant about differences of opinion.

You'd be hard pressed to find a majority to favor increasing them, and those who are happy with them the way they are doubtless do so thinking that the market clearing wage is probably at or near the current minimum.

I can assure you my old copy of Samuelson (and he's a liberal economist) condemns minimum wage laws.

Here is the opinion of the former chairwoman of President Obama’s Council of Economic Advisers:

But your eagerness to regurgitate, on this very blog, such Heritage Foundation talking points as "...there has been no global warming for the last 16 years..."

But the believers admit that. They just say it's some temporary thing, and warming will resume soon enough.

"But the believers admit that."

Do they? Here's a simple plot of global temperature anomalies for the years 1997-2012. That slope sure looks positive to me! Sure, the relationship does not meet the .05 cutoff for statistical significance. By how much? Less than half a percentage point! The reason being it's a very small data set and that huge outlier in 1998 messes it up. Why do you think deniers choose this odd 16-year time frame? There's no other reason than that it fits their argument. 1998 was a record El Nino year. So what happens if you statistically control for that? Well lookie here. If you toss in an El Nino/El Nina variable, the time variable is, in fact, real and significant.

Are you admitting that the temperature has been flat, and blaming La Nina?

OVER the past 15 years air temperatures at the Earth’s surface have been flat while greenhouse-gas emissions have continued to soar. The world added roughly 100 billion tonnes of carbon to the atmosphere between 2000 and 2010. That is about a quarter of all the CO₂ put there by humanity since 1750. And yet, as James Hansen, the head of NASA’s Goddard Institute for Space Studies, observes, “the five-year mean global temperature has been flat for a decade.”

No. I think my last comment stands on its own. Get one of your grad students to explain it to you.

No. I think my last comment stands on its own

OK, it it stands on its own, it means you are admitting that global warming has stopped (or at least paused) and providing a reason.

So you are really conceding my point.

I am 94.51% certain that the earth's temperature has continued to warm over the past 16 years. How does the Cheney Doctrine go again? Oh yeah. "If there's a 1% chance that [a given catastrophic event will occur], we have to treat it as a certainty in terms of our response."

But I'm sure conservative think tanks are more reliable than those conspiring scientists.

Hey Anony, is that a peer reviewed article? I'm guessing not, given the authors' associations (pretty heavy on the Skeptical Science, doncha think?) and fields of study (about as meaningful as a political scientist with no stats chops):

Yes, it is peer reviewed. Skeptical Science is "skeptical of global warming skepticisim." And because it was a meta-analysis the authors were just reporting what other studies have found. I would imagine that each of the fields listed would have the tool set to perform such a task.