The Marquette University Intercultural Center, which is funded through a combination of tuition and student activity fees, hosted the March 23 event, titled “Men to Men: Responding to Microaggressions and Why They Matter.”

At one point, Jenkins suggested that the university seal is a microaggression because one section of it depicts Marquette’s namesake, French explorer Fr. Jacques Marquette, standing in a boat being paddled by a Native American guide.

“Do you know what the Marquette seal looks like? Is that a microaggression?” he asked the audience, which responded with enthusiastic cries of “Yes!”


“Where does this stem from? I look at the Church,” he [Simon Howard] continued, noting that the primary image he associates with the Church is “a white Jesus,” and that this is true even of many people who don’t actively participate in religion.

Petrizzo recorded the entire event, which you can listen to here (warning, it includes a lot more politically correct whining):

Below is the painting by Wilhelm Lamprecht which is the basis of the Marquette seal. 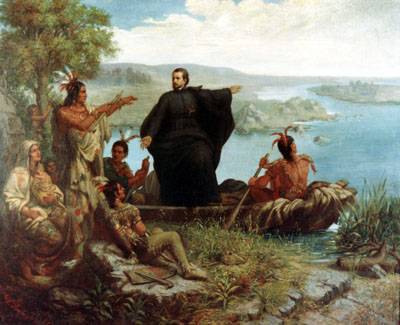 And here is the Marquette seal:

Clearly, the Marquette seal crops the painting to emphasize Fr. Marquette. And just what is wrong with this?

The place is named “Marquette University,” not “Some Indians Who Happened to Be Around When Marquette Was Exploring the Midwest University.”

Marquette was the great explorer. The Indians were probably perfectly fine people, and helped guide Marquette around, but they didn’t get a university named after them.

So just what kind of whiny brats feel “microaggressed” seeing the seal? The sort that academia is turning out in considerable numbers these days. And the sort the Center for Intercultural Engagement panders to.

Geez Louise! -- what tiny, unpleasant lives the PC crowd must lead -- I'd pity them if they weren't so dangerous to our liberty

This post jogged my memory. I’d meant to find out when the Intercultural Center would be having the next round of lectures on the history of the brutality of Native American societies. I know the Center has undoubtedly, and in an impartial way, labored to give an honest discussions of such Native American practices as horrendous torture of rival tribes, cannibalism, human sacrifice, scalping of victims (they had the jump on Europeans in this), wars and conflicts over land, etc. There were differences, but such practices were not ineptly nor rarely performed. If only they’d shared the contemporary academic sensibility in which microaggressions are the equivalent of genocidal holocaust.