Marquette Warrior: Off the Cliff! 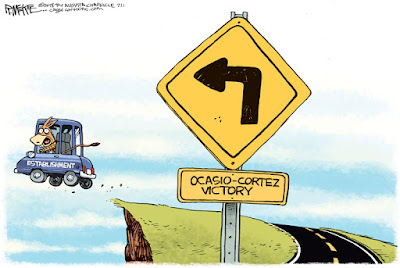 @ Golden Eagles: The Supreme Court decided that "my colleagues" (translation, just a bunch of professors) were wrong. Between ideological bias, and toadyism, professors are not any sort of judge of what a conservative colleague says.

Just a bunch of professors? Is that how you characterize your colleagues. Sad to hear that. Regarding the Supereme Court - you have got to be kidding if you believe this was a fair and just decision. There was no free speech issue here. It simply didn’t exist. The case made by the WSC was made up. This was just another example of justices making stuff up to further the wants of their paymasters. Let me ask you this John - is online bullying and creating a hostile environment ok with you? Perhaps it is, in your eyes as long as you claim it is academic freedom.

@ Golden Eagles: What you call "online bullying" was simply journalism. An instructor bullied a student, telling him his views were "homophobic" and "offensive." I reported that. If that is "bullying," any journalist can be accused of "bullying."

@ Golden Eagles: It was a free speech issue because Marquette guaranteed, in our contracts, faculty all the right of expression of the U.S. Constitution.

You need to actually read the Supreme Court decision.

@ Golden Eagles: here is a question for you: supposed a male instructor sexually harassed a female student. Suppose the student went to Marquette officials and they did nothing about it. She then came to me, and I publicized it on my blog.

Would you object to that?

@ Golden Eagles: You are growing more and more abusive. I did not link to Abbate's e-mail address. You should know that:

And your silly claim about what "every employer" would do shows apparent ignorance of the fact that Marquette promises First Amendment free speech rights to faculty for "extramural" speech.

Do you actually think Abbate did anything wrong? Or do you think it's OK to shut up politically incorrect speech?

@ Golden Eagles: You didn't answer my question about a male instructor who sexually harassed a female student. Answer it.

So no, you didn’t provide a link but you did provide easy access to her information - in both posts. Harm was caused indirectly. The point is you are not the referee of everthing politically correct. Now I see you have once again gone on a witch hunt attacking Marquette. May I suggest that If you continue to harbor such resentment against MU that you request a buyout. Unless of course you enjoy being the protector of snowflake students like JD. I found this paragraph of a dissenting opinion quite interesting and valid. Or perhaps you will continue enjoy attacking faculty and women TAs.

“This irony is more apparent than real. That is because this is not an academic freedom case. No one is challenging McAdams’ right to post whatever thoughts he has on issues of public concern. Instead his willingness to publicly attack a student, while supplying contact and other information that allows his readers to harass and threaten Abbate was the basis of the sanctions imposed by Marquette.”

How did you get to sexual harassment? You’re talking about a different level all together. If I were in your shoes I would have referred this student to an outside agency such as the MPD. Your role would not be to expose this as it wasn’t with your blog regarding the TA. You should have told the snowflake student to go back to the teacher and continue the discussion in her office. You decided to take it to your bully pulpit and get your so called “conservative “ hate mongers involved. In the real world - we don’t run to the big daddy blogger to solve our problems. The lesson you taught this student was to run to daddy or mommy if he has a problem.

@ Golden Eagles: so you would not have thought it newsworthy if Marquette failed to properly respond to a claim of sexual harassment? I should have kept it secret? As for the MPD, sexual harassment (as opposed to sexual assault) is a workplace issue, not a criminal issue. Nobody is going to believe that you would really want me to keep that secret.

As for the "snowflake" student: are you talking about Abbate, or the student she insulted?

As for "continuing the discussion:" Abbate made it clear there was nothing to discuss. She said opposing gay marriage was "oppressive discourse." She was a bigot. If a graduate instructor had made a racist comment to a black student, you would not have said that he should got to the instructor's office and talk about in.

And you would not have mined my blogging about it.

You need to read this:

You would doubtless like me to leave Marquette, since you can't tolerate opinions that differ from your own.

So answer this question: did Abbate do anything wrong? Or do you think she was right to say that arguing against gay marriage should be banned?

Let me clarify - if a student is sexually harassed I would have reported it to Marquette University. I would have encourage the student to do it also. In fact I would have gone with the student to report it. No you should have not kept it a secret. However, it would not have been appropriate for you to solve this through your blog.

Regarding the snowflake student - I believe you know exactly who I am talking about. Running to you with a recording was inappropriate. And what you did to further enable this snowflake made the situation even worse. You taught him to run to daddy and mommy when a teacher doesn’t agree with him. And what did daddy do - he ran to WILL where he knew the Bradley funded law firm would take this to the biggest conservative daddies and mommies in the state - WSC. This was a great teaching moment for your snowflake but you chose to keep him from melting by signing up to be his surrogate mommy. Sad to see that you did didn’t adhere to the anti snowflake agenda you and your right wing zealots adhere to.

You don't really think Abbate did anything wrong, do you? Answer that!

You think it's not significant when a student is bullied and demeaned and told the Catholic position on marriage is not allowed to be voiced at Marquette, since it would come across and homophobic and would "offend" any gay students.

You whining about the Bradley Foundation gives you away. You are a leftist who hates conservatives, and are bitter because conservatives won this one.

But you would not be bitter if you believed in free speech. But you don't.

@ Golden Eagles: so let me get this straight. A female student is sexually harassed. She goes to the Marquette administration, and is blown off. They do nothing about it.

That is your position, right?

Information about harassment is available from the following offices: Student Development, Residence Life, Student Affairs, Campus Ministry, Counseling Center, Recreational Sports, Marquette University Medical Clinic, International Education and Marquette University Police Department (MUPD). The Office of Human Resources may be contacted for counseling and assistance relating to affirmative action issues. Anyone with a question or concern about harassment is encouraged to contact one of the above offices for counsel and assistance.

The right of confidentiality for any party involved in a harassment incident, including the complainant and the charged, will be respected insofar as it does not interfere with the university’s obligation to investigate allegations of misconduct and to take corrective action where appropriate.

Any student or employee may also contact the affirmative action officer for counseling and assistance.


Now getting back to your question: No it would not be appropriate for you to blog about this. You are assuming that the complaint is legitimate. With all the resources available to this student - I doubt your blog would be the last recourse. And if it was this student risks some serious defamation lawsuits by doing so. Would you want to be part of that lawsuit - oh that’s right - free speech to spread rumors is ok - as long as you have WILL and the WSC.
Honestly - without such a partisan WSC you would not be returning to MU.

@ Golden Eagles: Don't you see how you have now painted yourself into a ridiculous position? You are denying that the MU bureaucracy might fail to properly handle a sexual harassment complaint.

But suppose the student had a recording showing absolutely that the harassment occurred. And suppose Marquette did nothing about it?

You say I still should not blog about it?

Suppose an instructor made a racist comment to a black student?

I’m not denying anthing. What I’m saying is that there are many options to try before resorting to a blog that doesn’t always tell the truth
( example - Straw Blog ) If the student had a recording he or she could take that to a lawyer and MU. In reality it would have been resolved without you intervening. You seem to think that when presented with overwhelming evidence that MU would do nothing.

Racist comment? Advise the student on how to file a complaint.

Regarding your claim that you didn’t link to her information- this is a falsehood. I suspect you’re trying to play a word game here. You linked to her blog which has all identifiying information needed.

Here - write about this conservative snowflake - or are you fixated on MU?

“In May 2017, the Brookfield Republican took a protest sign critical of the GOP from a public area of the Capitol and put it in his office. The protester, who had permission to post the sign, sued in federal court, and the state agreed to pay him $30,000.

Kooyenga, who is running for state Senate and has given a shifting set of reasons for taking the sign, said this April he and his supporters would pay the state back to cover the legal settlement.”

@ Golden Eagles: do you understand that *nobody* is going to believe you would actually want me to conceal sexual harassment or a racist comment directed at a black student?

It's obvious you are a leftist unhappy that it exposed leftist intolerance at Marquette. And even more unhappy that I had a right to do so.

@ Golden Eagles: Do you think Abbate did anything wrong? You have evaded this question. Please answer it,

I answered your question - when will you publish it?