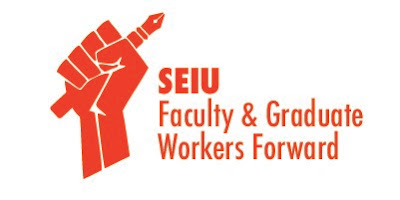 An e-mail, apparently sent to all faculty, from the SEIU:

Today, non-tenure track faculty and grad workers, surrounded by tenure track and tenured faculty, undergrads, community allies, joined together to ask the Lovell administration for a fair process to form our respective unions. Just last week the administration said in a letter to non-tenure track faculty said they would respect “the lawful right of employees to decide whether they wish to be represented by a union.” Today we delivered letters signed by hundreds of contingent faculty and grad workers calling on the administration to live up to their words and Marquette’s Catholic social teachings by remaining neutral and by granting us a fair process.

Please add your name here to stand with us, as we move forwards towards improving teaching and research conditions.

Clicking on the link to sign the petition does not allow one to see who has signed it, but does show the sort of rhetoric the union is using.

Of course, what is “substandard wages” is a matter of opinion, and the notion that everybody should be on a long-term contract is absurd, given the need to add (or sometimes cancel) sections of classes on relatively short notice.

As for “quality health care:” it is absurd to think that somebody who is hired to teach a section or two of a course in a semester should get the very expensive health care plan that full-time Marquette employees do. These people can go to the Obamacare exchanges, or (if they are that poor) enroll in Badgercare.

The point about the massive endowment is a good one, although it’s not clear it should be used to pay adjuncts above the market wage, rather than to hire more faculty (including adjuncts) to support smaller classes, or to fund research at Marquette, which would have the effect of increasing the prestige of Marquette and thus the value of graduates diplomas.

Or, for example, devoting more money to scholarships, allowing either or both (1.) allowing more students from poorer families to attend, (2.) bidding for particularly bright and capable students.


No one — including professional academics at a top university — should lack basic job protections, healthcare or livable wages.

Sounds good, until you notice that “basic job protections” means you can’t be laid off even if they don’t need you anymore.

“Livable wages” sounds good, until you notice that if you pay them more, you are likely to hire fewer of them, increasing class sizes. Many adjuncts have other (full-time) jobs, and make a “livable wage” elsewhere. Graduate students typically borrow money to make it through graduate school. That’s fair enough, since they are getting training and a credential that will get them a higher income the rest of their lives.


. . . we ask Marquette University to adopt the high-road practices of Catholic social teachings, and not obstruct our contingent academics as they exercise their fundamental human right to organize, to better their work conditions, and raise educational standards for the entire community.

What it most likely will improve is the financial situation of the SEIU. But that, after all, is the point.

This union appears to be one of he most powerful supporters of illegal immigration which: Suppresses the wages of many Americans; And, facilitates the stealing of jobs from the poorest of our fellow citizens and legal immigrants.

"Please add your name here to stand with us, as we move forwards towards improving teaching and research conditions."

Union goons improving teaching and research conditions? What a hoot!