Campus leftists at Marquette, like their cohorts on virtually every other campus in the nation, can’t tolerate views with which they disagree, so when the Young Americans for Freedom invited conservative spokeswoman Rachael Campos-Duffy to campus, what happened was not surprising.

Members of the organization posted flyers advertising the event all around campus. This is the flyer: 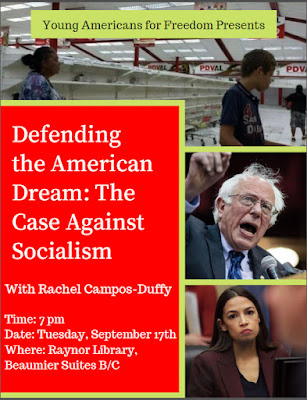 Nobody familiar with the campus political scene will be surprised with what happened next. At least one campus leftist went around tearing down the posters, and then went on Instagram to brag about it.

The person in the Instagram post is unidentified, but we hope someone is able to identify him, and report him to Student Affairs.

Unfortunately, Student Affairs has a record of very lenient dealings with leftist students who vandalize things.

When members of the feminist group Empowerment vandalized an anti-abortion display mounted by Marquette Students for Life, the vandals received a mere slap on the wrist. The guilty students were required to write a three page paper explaining how they had how they had “acted irresponsibly.” One student on the panel refused to do that, saying “it’s finals week.” So did one other student. Both were put on university probation for a semester. Not suspension, but mere probation.

We will see what comes of this, but the odds are that campus bureaucrats don’t think ripping down a poster advertising a conservative speaker is a big deal. Had the speaker been a leftist, it would play out very differently.