Marquette Warrior: Obama’s Buddy Ayers: The Picture Tells It All

Obama’s Buddy Ayers: The Picture Tells It All

Via Badger Blogger, Barack Obama’s friend Bill Ayers in a pose that shows just what he thinks of America.

Ayers is a professor at the University of Illinois at Chicago, in Education, which tells you a lot about education schools these days.

His connections with Obama aren’t trivial.

But as Patrick at Badger Blogger put it, “Don’t Question Their Patriotism.”

Best comment on this, from Fraley’s Daily Takes: “Now we know why Obama doesn’t wear a flag on his lapel. He’s afraid Bill Ayers will stand on his chest.” 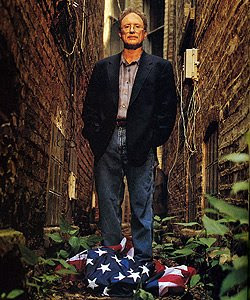 While I'm here, Cass Sunstein is worth reading on the subject. From TNR:

Of the many ludicrous political discussions of the last six months, the most ludicrous may well be the discussion of the alleged association between Barack Obama and Bill Ayers, former member of the Weather Underground.

Bill Ayers and his wife, Bernadine Dohrn, have lived in the Hyde Park area in Chicago. So has Barack Obama. (So have I.) If you lived in Hyde Park for (say) a decade, there was a good chance that you'd run across Ayers, and maybe even be at a social occasion with him. And if you were a social person, or someone who was running for political office, you would meet a lot of people, and it's pretty likely that you would run across Ayers, or be at some social occasion with him.

Ayers is one of numerous people, in the Chicago area, whom Barack Obama has run across. Obama has much closer relationships with numerous conservatives on the University of Chicago faculty, many of whom have given money to Obama's campaign, and many of whom have talked to him at length and been at social occasions with him.

True, Ayers apparently had a small party for Obama back in 1995; true, Ayers gave some small sum of money to one of Obama's campaigns; and true, Ayers and Obama simultaneously served, for a time, on a board of a local organization, the Woods Fund, which helps disadvantaged children. But there was nothing even vaguely like a close relationship between them; and it would be easy to identify countless people, since 1995, with whom Obama has had much closer associations.

Of course many legitimate questions can be raised about any candidate for public office. But it is a gross understatement to say that the alleged Ayers-Obama association is not one of them.