Marquette Warrior: Public Opinion on Gun Control: Not What You Think

Public Opinion on Gun Control: Not What You Think

If you listen to the anti-gun people in the wake of the Sandy Hook shooting, you might think that there is an overwhelming public consensus for the policies the liberals favor.

But if fact, as a new Gallup Poll shows, the picture is much more complex.

It is true that a clear majority of Americans favor stricter gun laws, or at least say they do if asked that question. 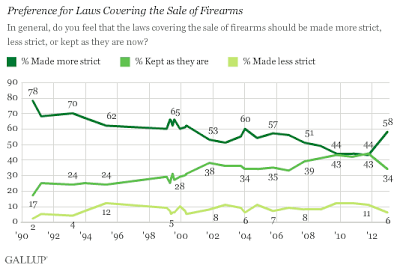 The striking thing here, however, is that support for stricter gun laws has declined sharply since the early 1990s. True, Sandy Hook caused an uptick. But there have been mass shootings before, and any uptick was temporary.

But what about the most commonly mentioned kind of “stricter gun law,” a ban on assault weapons? 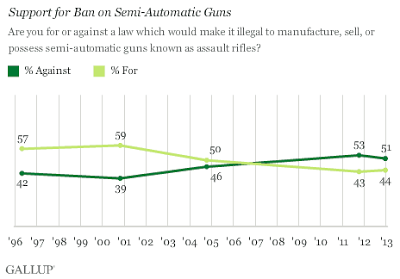 Of course, if you asked the question differently, you might get a different answer. If you said “military-style weapons” you could probably get a majority favoring a ban. But Gallup did use a relatively straightforward question.

Asked about some more modest gun control proposals, majorities were in favor. Gallup showed an overwhelming majority in favor of background checks, including checks at gun shows. Gun shows are exempted under current policy, and for reasons that were good ones at the time: there was no way to process such a check in a timely fashion. But technology should have alleviated that problem — or at least it will if government makes the appropriate data available over the Internet.

None of Gallup’s questions tap the intensity of opinion on these issues. But there clearly is a huge asymmetry of intensity, with pro-gun people being highly intense. The anti-gun people are split between relatively apolitical people who don’t care much, and liberals who are highly political, but are concerned with pretty much every issue under the sun.

Another striking thing in the Gallup poll was the fact that support for a ban on handguns has been dropping over the last two decades, and is at an extremely low point. So what is going on here?

The public is not necessarily terribly sophisticated in terms of policy. Nuts wanting to get guns can use straw buyers or buy on the black market (or steal weapons) and thus evade background checks. Large capacity magazines would also likely be available on the black market even if banned, and it doesn’t take long to switch out a low-capacity magazine and keep shooting.

The guys who have engaged in mass shootings have been intelligent schemers. Deranged, but intelligent, and capable of mounting elaborate operations. These sorts of people would have both the smarts and the motivation to evade pretty much any gun law.

And there isn’t even a majority to ban military-style weapons that law abiding gun buffs own, and enjoy shooting.

And the trend of opinion over time favors gun rights.