They were, of course, arrested and charged with disorderly conduct. Below are the mug shots of the students arrested.

So what are these students demanding? In fact, there is a document that is their manifesto, and it reads like a compilation of the standard politically correct grievances and demands of the race hustlers on college campuses.

That these folks don’t know what “impartial” means nor the usage of “who” and “whom” are the least silly things about this.

What is supposedly objectionable about the seal? One leftist faculty member explains:


“Where Father Marquette is active and commanding, the Native figure appears passive and subservient,” [Jodi] Melamed said. “It’s the classic colonialist and white supremacist division of humanity being represented: the white Jesuit provides the direction, he’s the brains of the outfit, the Native person provides the labor and follows the white person’s lead.”

Melamed, of course, brings the standard politically correct obsessions to the issue. Academics like her, if administered a Rorschach test, would doubtless see colonialism, white supremacy, racism, sexism and homophobia in the ink blots. In reality, Father Marquette was indeed “in the lead” as somebody exploring a land new to him.

And others don’t bring Melamed’s obsessions to the subject:


Jacqueline Schram, faculty advisor of Marquette’s Native American Student Association, sees the image as an inspiration of reflection and hope that Marquette can work to improve its focus on Native American issues and students.

“For me, the Native American in our seal serves as both a source of pride and compass,” Schram said in an email. “The decision to indelibly etch the historic relationship between the First Peoples of Wisconsin and Father Marquette pays homage to the interdependency and inspires a sense of hope that this can be once again.”

But for the politically correct, no opportunity to be aggrieved should be passed up.


The expansion of the core curriculum to include 2-3 more diversity and inclusion required courses that unambiguously address the realities of white privilege and oppression at Marquette, in Milwaukee, and in our nation[.]

Marquette already requires one “diversity” course chosen from a list of courses, virtually all of which are politically correct victim studies.

But this, apparently, is not sufficient indoctrination.

Note the demand that “required courses . . . unambiguously address the realities of white privilege and oppression at Marquette.” Apparently, there has to be an ideological litmus test for these courses. The instructor is not allowed to conclude that “white privilege” is not a useful concept in analyzing race relations, nor that the chief sources of black oppression come from within the black community.  Of course, objective social science says that the biggest disadvantage that black children face is the lack of a father. This subject would apparently be out of bounds in these courses (or else, somehow blamed on white Republicans).

The there is this:


A dialogue and reflection based training on How to end discriminatory violence in the classroom and in the campus community for Faculty/Administration/Staff, New student orientation and beginning Service Learners

So there is violence in Marquette classrooms? Minority students are getting beaten up? If so, where are the arrests?

But the politically correct campus left, unfortunately, defines violence as pretty much anything they don’t like. Might a black student hear somebody criticize affirmative action? Might an Hispanic student hear somebody say that the nation should control its borders, and stop illegal immigration? In the rarefied world of academia, mere opinions that the leftists don’t like qualify as violence.

And of course, the standard treatment for Thought Crime is a “dialogue and reflection based training.” In other words, Stalinist reeducation.

The next part is more explicit as to what might constitute “violence.”


The further development of the Bias Incident Report System to include an anonymous submission option and a student response team inclusive of student leaders, residence hall RAs and Diversity Peer Coordinators. . . . We define discriminatory violence as physical harassment, language, exclusion or imagery that targets an individual or group based upon their race / gender / sex / class / national or cultural identities

Here, it is obvious that “violence” is defined so broadly as to be meaningless. Is telling an ethnic joke violence? And how about “inclusion?” If a bunch of guys in a dorm go out for a beer, and don’t invite the black guy, is that violence? Did they fail to invite him because he’s black, or rather because he’s always whining about “systemic racism?” Or maybe he just wasn’t around when the guys decided to go out.

What the authoritarians who drafted this document seem to want is to micromanage all student speech, expression and association.

Next we have this:


Increased initiatives to recruit and retain students of diverse backgrounds – especially students from Milwaukee’s community. Currently the racial makeup of the city of Milwaukee is less than 50% white, while all racial minority groups combined only represent 20% of Marquette’s student population. This is unacceptable.

Why is it unacceptable? These folks appear not to understand that Marquette is classified as a “national university,” attracting students from across the nation (admittedly with a concentration from Wisconsin and northern Illinois). So why does the racial composition need to mirror the city of Milwaukee (and not even the Milwaukee metropolitan area)?

Marquette already discriminates against white students in admissions. Beyond a certain point, admitting less qualified minorities is counterproductive, since it places those students in a tough academic environment where they struggle, and often fail.


We call for the University to responsibly invest in companies that adhere to our Catholic and Jesuit ideals of promoting the betterment of the human community, therefore reconsidering its investment policy and divesting from companies that take part in the abuse and repression of human basic rights

They don’t specify what companies they have in mind here. Companies that do business with Israel? Defense contractors? They don’t say.

This one is particularly interesting:


(a) Remove race from DPS [Department of Public Safety] reports, (b) report ALL crime including sexual assaults, drug usage, etc., which will make clear that white students are frequent lawbreakers and will destigmatize black males/people and students of color on campus and/or (c) make available ALL crime reports via an online active report

The beef here is the fact that Marquette University sends out “Public Safety Alerts” whenever there is a crime on or (more likely) near campus, and the race of the offender (or offenders) is reported. Overwhelmingly, the offenders are black.

We analyzed all Public Safety Alerts issued between May 2014 and April 2015 (inclusive), and found that of 44 offenders whose race was reported, 37 were black. (Four were white and three Hispanic.)

Oh, my! This might give somebody the idea that blacks disproportionately commit crime. So why not conceal this information? Surely, if it isn’t reported, students will start assuming that they are just as likely to be assaulted or robbed by a white as a black. At least, people who drafted this document seem to think so.

As for reporting all crime, naming and shaming (for example) drug offenders, we aren’t terribly opposed to that. But who is going to be named and shamed? Christian students? College Republicans? Or the good buddies of the “diversity” crowd?

These folks better be careful what they ask for. They might get it.

But of course, the purpose of listing the race (and other descriptive details) in the Public Safety Alerts for at large offenders is to help apprehend them. Students smoking joints in the dorm are a different matter entirely.

Then, in a section of the document drafted by The Native American Student Association, we have this:

Here we have the nasty authoritarianism of the politically correct, wanting to stifle student expression. The notion that Indian nicknames are offensive to “Native peoples” is simply untrue. That is unless “Native peoples” merely means Indian race hustlers on college campuses.

So what we have here is a situation typical in academia: grievance mongers claiming to represent some constituency (Indians, women, blacks) in fact don’t. But on a college campus, where few have the courage to challenge them, and campus bureaucrats have every incentive to pander to them, they are anointed as official representatives.

That the Coalition of and for Students of Color at Marquette University is a rather extreme organization is revealed by their Facebook page, which shows support for cop killer Assata Shakur. Indeed, the posts show that these people see Shakur as a hero.

One of the images from the page is below: 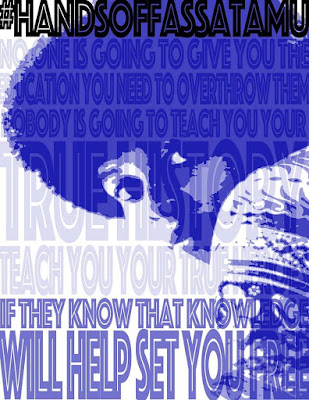 There is also a link to an essay titled “Our Sister, Assata Shakur: Life, Struggle, Justice, and Love.” What are these people thinking?

So how will Marquette react to the demands of this group? In a principled way? Certainly not. Might many or most of the demands be rejected? If there is enough pressure from people who think Marquette has carried political correctness way too far, maybe.

Since this occurred off-campus, it is not and expression of "Academic Freedom". However, does it violate some MU rule as would allow punitive action? After all, MU does have a duty as to public safety and the common good.

I'm curious, do these people give any rational thought about the long term ramifications of their actions (i.e. getting arrested)? If they're looking to get respectable jobs in the real world, I daresay that a business (probably moderate to conservative leaning) would raise a collective eyebrow on some of this stuff and give serious thought to passing on them as a potential hire.