From the Office of the Provost today:

• In case you missed it: Committee working on updating university seal – A university committee appointed by President Michael R. Lovell is working on an updated university seal that will celebrate Marquette’s Catholic, Jesuit mission and pay tribute to the influence of Indigenous peoples on our history. The committee has gathered input from the Jesuit community, Indigenous peoples, faculty, staff and students, and the design process is underway. The updated seal will be shared with the Board of Trustees for review and approval at a future board meeting. Learn more on Marquette Today.

So what is wrong with the present seal: it features Fr. Marquette.

It doesn’t sufficiently honor Indigenous peoples. Note, Marquette will not say “American Indians.” That’s not politically correct. Notwithstanding that Indian tribes call themselves “Indian” tribes. Those that don’t use “Indian” simply use “tribe” or “nation.” None calls itself “native American” or “Indigenous.” 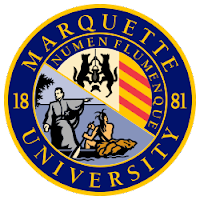 So, the current seal is politically incorrect because it gives a central place to Fr. Marquette. At Marquette University.

It’s absurd to say “an updated university seal that will celebrate Marquette’s Catholic, Jesuit mission.” It merely shows that Marquette is like secular universities.

Whic is something we already knew.

This is yet another example of the boneheaded political correctness that afflicts Marquette in the same way it afflicts most universities. Changing the seal will do absolutely nothing to help American Indians, but it will give a warm glow of virtue to the politically correct.