With a hat tip to Badger Catholic: 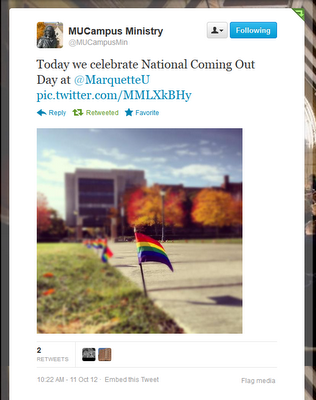 Don’t try to find it on Twitter now. It’s been taken down.

The Campus Ministry has long been on board with the gay political agenda. This is just one of many cases.

It would be one thing if the Campus Ministry wanted to minister to gay people on the basis of their facing particular temptations and particular challenges in leading a chaste life. But in fact these university bureaucrats believe that the only problem is that many people disapprove of homosexuality.

We just called the Campus Ministry, asking to speak to the person who handles the Twitter feed. The person who answered offered to forward our call to that person, but refused to give us the person’s name. The call forward did not go through, which happens all too frequently with the new phone system.

We just got a call from Mary Sue Callan-Farley, Director of the Campus ministry, who explained that the Twitter post was put up by a student “who did not have full permission.” It was then taken down by Thomas Anderson, S.J., who handles social media for the office, on the basis of the judgment that it was inappropriate. Callan-Farley said the student in question was “just trying to help her fellow students.”

But of course, we wonder, is endorsing homosexuality a way to “help” anybody?

Chastity applies to homosexuals, just as much as it does to heterosexuals. Any sexual activity outside of marriage is fornication. Heterosexuals and homosexuals are equally going down the wrong path if they fornicate. A campus support group or ministry is focused on the whole person, and yes these are people who identify as homosexual. If someone identifies as homosexual, they have come to realize that based on their life. Who are we to judge one group of people when we have/do commit the same sins.

>>> Who are we to judge one group of people when we have/do commit the same sins. <<<

The problem is that Marquette approves the sin of fornication for homosexuals.

Look at the attempt to punish the Intervarsity Christian Fellowship when they expelled an officer who not only rejected Christian teaching about homosexuality, but was having a homosexual affair.

The organization was clear that heterosexual fornication was also out of bounds for an officer.

If the University made it clear it opposed fornication (both straight and gay), that would be one thing. But that's not their position.

As I said: "It would be one thing if the Campus Ministry wanted to minister to gay people on the basis of their facing particular temptations and particular challenges in leading a chaste life."