What happens to you if you are a recent high school graduate, just admitted to Marquette, and you go on Tik Toc to boldly affirm that you are a supporter of Donald Trump?

The answer is: some leftist Marquette students demand your offer of admission be rescinded.

And how does Marquette respond to such demands? It calls in the student for an Inquisition about her political beliefs, and tells her she may be kicked out of the Freshman class.

As usual, Marquette panders to the leftist mob.

This particular student, whose identity we will not reveal, is quite outspoken in her support of Donald Trump. She posted on TikTok a video of herself over a hip-hop song with the letters on the screen saying “when people see that I support Trump, they start hating on me.” And further: “Then try to hate on me, and think I’ll change my views.”

The TikTok video was apparently noticed by one Erin Cook, who reposted it on Instagram, with the notation “Shits tacky. Pls watch out for this one, MU.” Yes, you really have to watch out for those Trump supporters.

We can tell how much Cook hates Trump from a meme she posted on Instagram:

But Cook was not content with this. She wrote to Marquette’s Dean of Admissions, apparently demanding the student’s admissions be cancelled. We say “apparently,” since she did not post her message to Bryan Troyer. But she did post his response:

Cook also began a campaign to get fellow leftists to write Marquette. Her Instagram profile has a notation “Email Marquette Admin.” A down arrow leads to a PDF document that is supposed to be slightly customized and sent to a long list of Marquette officials. It outlines the supposed offenses of the student.

Further: “she is defending President Trump’s stance on immigration” — something that clearly should not be allowed — and “arguing that undocumented immigrants are ‘illegals’ and ‘only here to commit crime.’” Of course, they are here illegally,  and it’s dishonest to use “undocumented.”

And she in fact never said immigrants are “only here to commit crime.”  She did say that immigrants increase crime, but didn’t say they are more crime prone than other groups.

The student is further accused to mocking transgender individuals in a YouTube video where she is wondering around a thrift store. She points to a pair of of shoes that are a woman’s style, but a very large size. She says “those are cross-dressing shoes.”

This is supposedly an outrage, not withstanding that biological males who cross-dress do, in fact, have feet way larger than the typical woman.

Cook takes offense at another post by the student on transgenderism.

The irony here, of course, is that the student’s position is essentially that of the Catholic Church. Not that Marquette bureaucrats care about that in the least.

The document ends with the usual claim of the politically correct:  people will feel “unsafe” if allowed to hear political arguments they don’t like.


These comments create and perpetuate an unsafe space for the LGBTQ+ community, first generation students, and Dreamers at Marquette. . . . The University can and should make it their priority to ensure students (specifically LGBTQ+, immigrants, first gen [sic], and POC) feel safe, valued and appreciated on campus.

In the first place, anybody who is too cowardly to hear political arguments they don’t like doesn’t belong on a college campus.

But in the second place, it’s a lie. These leftist students simply don’t feel unsafe. But claiming to be  offended hearing arguments they don’t like, and feeling “unsafe” are claims used to bully into silence people with whom they disagree.

The student began getting nasty messages and e-mail from leftists. We have included a sampling below.

There are a lot more.

Such messages are relatively minor, obviously from idiots, but much worse is what Marquette could do.

The student was subjected to an inquisition by officials from the Admissions Office. The point: was she really the evil conservative that the leftist students claimed.

According to the student:


It did not appear that they were placated. If anything the hostility with which they spoke was made apparent in their questioning as if nothing I said could liberate me from their judgments, only convict me further.

Of course, this being an Inquisition, there is no way to prove your innocence to the Inquisitors. If you are accused, you are guilty.

We will see what they will do. But given Marquette’s pandering to leftist students claiming to represent some victim group, we are not optimistic.

We queried Brian Troyer, Dean of Admissions, and he simply responded that “I cannot discuss matters under review involving future and/or continuing MU students.” We didn’t expect him to.

And we have pretty much given up expecting Marquette to care about free speech, a diversity of opinion, and Catholic thinking.

Or challenging students to consider ideas they might dislike. Unless they are conservative students. But there are going to be many fewer of those. 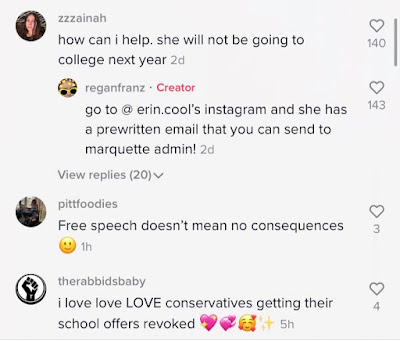 All of these, of course, show the deranged hatred leftist students at Marquette have for people who don’t share their political views.

Yet these are the sort of people to whom Marquette panders.

so touched you chose to include my tik tok comments and showcase my deranged leftist beliefs :) i mean who really cares about making sure trans people feel safe on campus? <3

So to make trans people feel "safe" everybody has to agree with transgender ideology.

They have to deny basic biology.

A university ought to be about different opinions. You want to enforce a rigid orthodoxy.

Unknown, what does "safe" mean?

Was any trans student threatened by this person?

Or was it just that someone's belief system is threatened?

John I obviously don't know the ins and outs any more than you do. But by all appearances the student in question did not write a careful piece of analysis on gender, essence, and the metaphysics of biology. What brought this on was a mocking post, showing that the student was, basically, not a very nice person. It is totally legitimate for an admissions office to take the moral character of a student into account when making its decisions. That's what letters of recommendation are often for.

I would agree that a social media post making fun of, say, Karens, would not have elicited this response. But to raise that in this context would be a false equivalence. The student in question was mocking members of group that society, and elements of the Catholic church in particular, has historically reviled. Karens have been privileged (to use the term du jour).

I understand that you and many of your fellow conservatives reject the views that society is stacked against certain groups and that the university has a special obligation to counteract these social structures. Fine. Though I personally and philosophically disagree I think that conservatives should be able to keep making their case in the Academy and I think that a place like Marquette would be more intellectually alive and honest if we were to hire someone with such views now and again. But I would not present this particular admissions decision as a case of "Trump supporters not allowed here."

Not a very nice person? What about the people harassing her, and demanding she not be allowed to come. *They* have not been disciplined. It's clear you only demand conservatives be "nice."

And of course, she is perfectly nice. She just says things you dislike.

"a careful piece of analysis on gender, essence, and the metaphysics of biology."

Huh? This is really a reasonable expectation from somebody who just graduated high school?

So it's OK to make fun of "Karens," but not transgeners?

That is the essence of political correctness. That certain victim groups cannot be criticized.

You think they have free reign to berate whites about "white privilege" and "white fragility."

You, in fact, don't believe all groups have equal rights. You believe fashionable victim groups have more rights that other groups.

That's racist, sexist, cisphobic, and so on.

Has an obligation to punish speech? To stifle opinions the left dislikes?

Do you really think that how to "counteract these social structures" cannot be discussed?

If one wants to "counteract these social structures" it's obvious that the police be defunded? That statues be torn down?

That there should be affirmative action? That black kids do badly because of white racism, as opposed to being born out of wedlock (as 72% are)?

As for "stacked against certain groups:" how does "society" stop black people from getting married. In the 1950s, only about 20% of black kids were born out of wedlock.

You are not demanding that Marquette help "marginalized groups." You are demanding that anything other than the standard leftist prescriptions be punished.

Which means, if you got your way, that nothing would be better for "marginalized groups."

But a lot of white leftists would feel better having punished the heretics.

>>> I think that a place like Marquette would be more intellectually alive and honest if we were to hire someone with such views now and again. <<<

That's mighty big of you.

Suppose I said "I think that a place like Marquette would be more intellectually alive and honest if we were to hire a black or Hispanic now and again?"

Oh spare me the sanctimony. People like you are too keen on keeping out anyone who doesn't share you're warped agenda.

In reality, a Catholic school like Marquette pretends to be would be more intellectually honest if they actually hired someone who took Catholic theology seriously.

I keep seeing the word "threatened" being used in the comments here.

To be clear, the only "threatening" that has happened, happened to Samantha.

If the mere utterance of a view to which you disagree is "threatening," you have bigger problems and should seek some professional help with your coping skills.

Is there a process to get Emily Cook expelled for creating a violent and unsafe campus for Samantha? Here actions have led to threats of violence and death. Totally unacceptable. The administration at Marquette is condoning a violent campus by their silence on this matter. Silence does equal violence. I have noticed that Emily Cooks Instagram page has gone private.

Erin Cook seems to have appointed herself as sheriff, judge & jury...on all matters she deems in need of adjudication.

Recently she's in the press for narc'ing on and bloviating about students who are gathering in a manner which she deems inappropriate.

Just an FYI, should anyone feel the desire to have a chat with her they can stop by the receptionist desk at Mashuda Hall and there's a 50/50 chance she'll be there answering the phone and checking ID's (or summarily waving in illegals who don't have an I.D.).