Harvard Caves to the Mob

We Didn’t Want That Investigated! 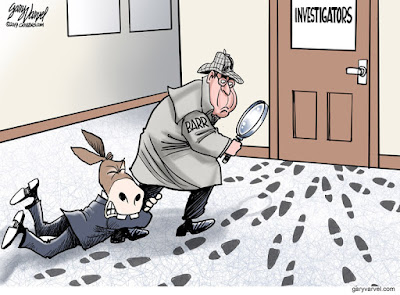 We’ve blogged on the attempt of the Service Employees International Union to unionize adjunct (non-tenure track) faculty at Marquette.

Today, the campaign escalated. A somewhat bland e-mail sent to some Marquette employees alludes to what happened:

We know many of you are aware that some non-tenure-track faculty and graduate students occupied the lobby of Zilber Hall today to bring attention to their effort to form a union. Acting Provost Ah Yun met with this group multiple times today and committed that Marquette would follow the law with respect to any union organization and election activities.

To ensure business operations can continue as usual if protestors [sic] choose to occupy the Zilber lobby for multiple days, we have taken the following steps:

• Protestors will be asked to stay in a designated area of the lobby to ensure elevators, stairwells and pathways into offices are kept clear.
• Access to the fourth floor elevators and stairwells will require MUID badge access, which has been granted to all Zilber Hall employees. If for some reason your MUID is not working, please contact Chris Gatzke in MUPD . . . .
• If a meeting scheduled on the fourth floor includes an individual who is not a Zilber Hall occupant or ULC member, they will have to be met on the first floor and brought upstairs by someone with MUID badge access to the fourth floor.
• MUPD will have a presence in the Zilber lobby – please contact MUPD if you need assistance.

We know that some of you were confused or felt unsettled at certain points during the day, and we are hopeful that the above measures will alleviate the stress and provide assurance that the safety and security of our colleagues is of utmost importance. Thank you for your patience and your dedication to Marquette.

A more blunt assessment of the situation comes from a source in Zilber Hall:


The professional SEIU goons occupied parts of Zilber this afternoon and demanded the provost’s time. He agreed to meet with them. Apparently (see below) that wasn’t enough. What a surprise! Prior to their meeting(s), the pro-SEIU goons were chanting and pounding in the stairwells. The whole building was shaking. I’m sure they’re proud of that. But their point?

I had a meeting that required me to take the steps after they had moved out of the stairwell and into their meeting. Mud ALL OVER the steps. Clearly deliberate. Do they realize they just added a huge extra task to the poor cleaning crew’s duties? Do they care? Of course not.

Now we employees — and MUPD — are supposed to accommodate them as they lay about the Zilber lobby disrupting university security resources in their zeal to secure more tuition dollars for themselves. That’s social justice!

This is the absurdity of the Left attempting to accommodate its own Frankenstein monster.

This kind of behavior is a good reason for Marquette to oppose unionization. It is true that if the union gets majority support, Marquette has pretty much no choice but to recognize the union. The exception would occur if Marquette claimed an exemption from labor law on the grounds that it’s a religious institution. Given the dubious nature of the school’s “Catholic mission,” such a claim would reek of hypocrisy.

Marquette could, however, make it clear that certain bad consequences might follow from unionization. For example, if a union increases the costs of hiring adjuncts, or imposes rigidities in the use of adjuncts, fewer adjuncts will be hired.

So Marquette doesn’t have to roll over and play dead in the face of the campaign.

We have little faith that Marquette will act in a principled way, but perhaps the mere threat of higher costs and less flexibility in hiring will cause them to oppose the union. But we would not want to predict.